The Story Behind Echoing Hope 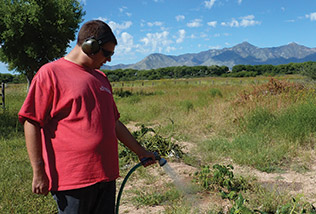 He sat up at six months and started walking at eleven months. His first words were spoken in a sing-song voice, “pumba-banba-way” from the Lion King at four or five years of age. He couldn’t tell anyone if he was hungry but from the age of six, if the computer was not working right, he was the one everyone in the family turned to in order to fix it.

My son, Chris, has always had a mixture of amazing capabilities and challenges. He was diagnosed with autism when he was just under three years old and was in school for seven hours a day from the age he was 3 until he was almost 22. Unfortunately, like many children with autism, when he was not in school, he had significantly challenging behaviors because his schedule had been interrupted. We tried summer programs designed for special needs children and many times were denied entrance because of Chris’s aggression. We tried attending support groups and social skills groups designed for children with autism and soon became so discouraged because he was more challenging than any other child in the group. After awhile it became clear that the groups offered no support for children and families significantly impacted by autism. Our family stopped going to them and focused on helping Chris learn as much as he could while continually seeking that next step. From a very young age, we knew he would need some kind of support throughout his life and tried hard to find opportunities.

Fast forward to Chris’s seventh year in high school when he has learned as much as his school could offer. At home, he was able to cook very simple frozen meals in the microwave. He could walk home from school, unlock the door and exercise for an hour by himself. He could not yet tell time and had no concept of money but we thought he had made incredible progress, more than we could have ever hoped for when he was child. However, we still worried for his future. He could still be very aggressive and had spent his high school years in a small room by himself with one teacher. How could he survive in the world? How could he continue to learn about living life and become a contributing citizen in society? Like so many significantly impacted children with autism, there are very few options for long-term care. 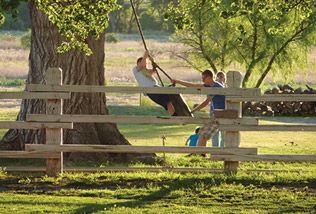 This is where Echoing Hope Ranch came to the rescue. We met other parents with similar challenges and concerns and decided to create Echoing Hope. With 1 in 54 children now being diagnosed with autism and 500,000 children with autism becoming adults in the next ten years, there is a huge need for programs which will allow people to grow and discover new interests throughout their lives. While there are other programs designed to serve people with disabilities, many of these cannot meet significant needs or do not understand autism well enough to provide continued growth. So often, a physically aggressive person with a disability is restrained, either physically or with medication, instead of investing in increasing the quality of the life of the individual so he or she does not have to engage in aggressive or other challenging behaviors. Many people with autism that are non-verbal are discounted as having no capability.

At Echoing Hope Ranch, our focus is on respect for the individuality and continued potential of each person we serve. Just as you or I change throughout the years, as we welcome new interests and experiences, so do people with autism. Meeting the need for that change will provide our residents and day program attendees with the chance for a fulfilling, productive life.

Having decided to create Echoing Hope Ranch our next step was to form a board and create policies, procedure, and goals. In short order, EHR was also granted a nonprofit status. Now, the hard work began. In January of 2010, The Tejido Group, a well-regarded graduate team from the University of Arizona’s College of Architecture, chose Echoing Hope as the focus for their semester project. From this collaboration, a comprehensive plan emerged, which outlined the ultimate vision of what Echoing Hope could eventually be. This site plan serves to remind us of our end goals as we move forward.

The property where Echoing Hope Ranch currently operates was originally the San Pedro Bed and Breakfast, owned and run for many years by Walter Kolbe and his family. Upon touring the available site, the EHR board was immediately struck by the ideal set of attributes it possessed. The serenity and beauty is outstanding, and the location provides not only a desirable privacy but also access to Sierra Vista and Bisbee for community interaction. The Kolbe family showed immediate support for Echoing Hope’s mission and the terms for purchase were arranged. At this time, certain donors such as The Click Family Foundation, The William and Mary Ross Foundation and The Silverman Foundation matched the donations put forth by the EHR board members in order to make the purchase of the property and first renovation possible. 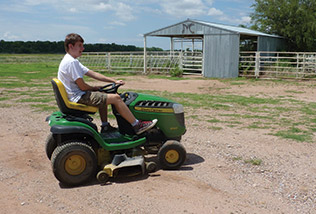 Tragically, Chris died just under a year after moving into his own, one-bedroom place on the ranch. In October 2013, he started suffering what seemed like a cold. Most symptoms went away, but shortness of breath persisted. Finally, it was determined that he had a cancerous tumor that was slowly squeezing his heart and lungs. He died Dec. 22, 2013.

Today Echoing Hope continues in Chris’s honor. In October of 2012, we began serving families in their homes, providing respite and habilitation services Echoing Hope style. It didn’t take long for word to begin spreading about this new organization which put a premium on respect and belief in the potential of each person involved. Echoing Hope currently provides in home services in Tucson and surrounding communities, and in the Sierra Vista/Bisbee area. There is an incredible, ongoing need for quality providers and this area of the organization has continued to expand steadily.

Today there are many full time residents at Echoing Hope Ranch, with several more on the horizon. Already, the residents who are living there are showing gratifying growth in independence and are enjoying participating in varied activities and outings. During the day they are joined by others from the community who come to be a part of the Day Program where they participate in horticultural activities as well as music, art and exercise programs.

The future looks bright at Echoing Hope. Plans are in the works to provide several new ways to enrich the lives of people with autism. A partnership with Cochise County schools will allow us to work with transitioning students, assessing their strengths and interests and creating opportunities for experiences and learning. A planned vocational program can train our clients and help with job placement and coaching. In addition, to enable more families to benefit from our services, plans are being made to hold summer camps at Echoing Hope, and to provide Community Based programs in both Pima and Cochise County.